I try to tell my students — don’t follow the crowd. All that competition makes things hard. GoldieBlox isn’t following the crowd. There are not a lot of “construction toys” designed specifically for girls. GoldieBlox thinks there is a market and that perhaps it can help solve a larger societal problem — the lack of women in engineering and the sciences.

GoldieBlox will need to target moms (buyers) and girls (users) — and this ad does both. The general subject — lack of girls in engineering and technology — is a hot topic which has helped to spur buzz. You can read more about the ad and GoldieBlox in this New York Times article, “Ad Takes Off Online: Less Doll, More Awl” (November 20, 2013).

The video and some class discussion might be warranted when you cover segmentation, targeting, and positioning, product or promotion. We have also posted this at Learn the 4 Ps.

Great ads tell powerful stories. This ad does just that. I love this ad, although I was not sure if it was just because I love basketball. I played a lot of basketball, and a bad hip (and replacement) no longer allow me to play the game I love. So I thought that maybe I wasn’t very objective. Then my 14 year-old daughter told me how much she enjoyed the ad. And she isn’t a basketball fan. Then I knew it told a universally powerful story.

If you want to read a critique of the ad, see “Guinness Got It Right Where Many Brands Have Fallen Short” (Visible Measures, October 15, 2013). It would be a fun ad to show in any class, but clearly consumer behavior and advertising might be the best fits. 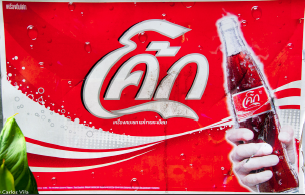 The last few years Coca-Cola has utilized “Happiness” as a platform for its marketing communications. Here at T4Ps, we have featured a few of these efforts.

Coca-Cola faced a few challenges implementing this campaign in Thailand in late 2011. First, Thailand was not one of Coca-Cola’s better markets. The company trailed Pepsi in market share by 40-24%.  In the previous five years, newcomer Big Cola had grabbed 10%. Coca-Cola lacked relevance in the market. A second challenge (later turned into opportunity) was a natural disaster. Thailand had recently suffered terrible flooding that paralyzed the country’s largest city (Bangkok). Coca-Cola had manufacturing problems and ran out of stock.  In this situation, a campaign based on “Happiness” might have seemed a bit insensitive.

But Thailand’s happy-go-lucky people have given the country the the reputation as the “Land of Smiles.”  I have been there and can validate the Thai are a wonderful people.  Coca-Cola built on that legacy and tailored its “Happiness” campaign to the Thai situation, creating the “Million Reasons to Believe in Thailand” message.

While it is nice to know the campaign won the Festival of Media Asia Awards 2013 Campaign of the Year — I find it is even better to share some real data.  In spite of a recession, Coke sales reached an all-time record of 29 million cases in March 2012. Coke raised its market share, taking much of that from arch rival Pepsi as it cut Pepsi’s lead in the market to two points (32-30%) down from its rivals 16 point lead.

This can be a great story to tell to demonstrate many different elements of marketing strategy planning. For example, Coke turned threat into opportunity. The case fits nicely with our marketing strategy process planning model, and would allow an instructor to walk through the model. The case demonstrates adaptation for an international market.  I suggest giving the case a bit of the background provided here and then showing the video.

Many brands use social media — Twitter, Facebook, etc. — to have conversations with their customers.  While controversial, more and more brands are looking at conversation as a way to build relationships with customers and to develop a clear positioning for their brand.  This long but very interesting article, “From Denny’s To Charmin, Brands Try To Crack The Social Conversation,” (Fast Company, January 15, 2013) debates this point.  Brands are still not sure if this strategy pays off — but more and more brands are afraid to miss out, so they are jumping in.  This article offers some very good examples of what the future of Promotion might (or might not) look like.

You might want to assign this to your students – when you cover branding or social media.  An interesting discussion could be had around whether the strategy makes sense or not — and what brands would be better candidates to use it.  Is it cost effective?  Worthwhile?  Are the benefits worth the risks?  Are certain brands or product categories better candidates for this strategy?

Danish Chocolatier Anthon Berg created a special pop-up store in Copenhagen, Denmark.  At this store, customers couldn’t pay for their boxes of chocolate with cash, they paid instead with good deeds.  Each product was labeled with a deed the customer had to perform – like “Serve breakfast in bed to your loved one” or “Help clean a friend’s house.”  Customers posted their promised “payment” on their Facebook page right in the store — helped by staff carrying around iPads.  Think about all the promotion operating here:  the store served as a billboard, the Facebook posts as advertising, and the positive media coverage as great publicity.  All of these tactics reinforced Anthon Berg’s desired positioning as a generous and socially conscious brand.  Brilliant!

The video below was put out by the ad agency, Robert/Boison, so you can share case study, insider’s view that make for a good example to show in class.  I think this would work well as an example to use when you discuss positioning, promotion, and maybe even price.  We also posted this at Learn the 4 Ps.