Nike shows support for mothers in this recent video. In time for Mother’s Day. This video offers can be integrated into and foster discussion on many different topics including:

A lot of digital advertising is based on the idea that firms like Google and Facebook have data that allows them to microtarget advertising. These two companies now dominate advertising media. But do they really work? On the one hand, you might expect that advertisers can (and should) be tracking the success of their online advertising. Unlike John Wanamaker, a retailing pioneer who is supposed to have said “Half the money I spend on advertising is wasted; the trouble is I don’t know which half,” today’s marketing managers are supposed to know what works and what doesn’t. They can see which ads bring click-throughs that result in sales. They can track those new customers over time and see if they continue to buy and how profitable they are. In theory.

In a new book, Subprime Attention Crisis, former Google employee Tim Hwang argues that theory is overblown. I have not yet read the book — it is on my Amazon wish list. That said, I did read a pretty good review of the book in Wired, “Ad Tech Could Be the Next Tech Bubble” (October 5, 2020). There I read, that Hwang’s book makes the case that “Microtargeting is far less accurate, and far less persuasive, than it is made out to be…” Most ads are never seen because of ad blockers or poor placement. Many are only clicked on by ad fraud.

I do need to read the book. As noted above, advertisers should be tracking this stuff themselves. But it does give me reason to pause.

OK, life gives you lemons (or worse, far worse, a pandemic), how do you make lemonade. Because the pandemic is everywhere these days, we might use this current event to get students to think about the impact on various types of business. You might ask your students questions like…

Many of their answers can be tied back to consumer behavior changing. This gives them the opportunity to see how understanding customers influences business. For more interesting examples you might share with your students, consider these articles: “Puzzles, hair dye, yeast: Companies thriving during COVID-19,” and “Early department stores were incredibly innovative. What happened?” to find less obvious examples.

Again, more examples from successful and less successful companies. See these articles about advertising “We have hit peak pandemic advertising, and now they’re just annoying,” and “Brands With Strong Twitter Personalities Stay the Course During Covid-19” (you may need to sign up to access that last one — you can get three free articles a month after signing up).

Who would have thought that Steak-umm, the brand of frozen processed meats, would become a “voice of reason in the pandemic” (Fast Company). The article highlights some of the Steak-umm brand  posts that encourage media literacy and for people to pay attention to the science behind the pandemic. The brand’s simple, honest posts got it positive press. Not sure  how it fits with the brand, but perhaps “all press is good press.” 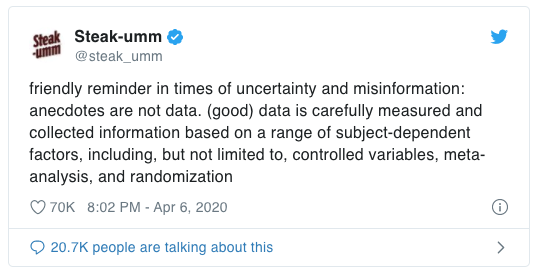 A few weeks ago we posted on a couple of articles discussing the question about how to advertise in a pandemic. This week, I thought I would share some favorite advertising that directly addresses the pandemic. It is amazing how quickly some brands (and their agencies) have created powerful ads in a short time.

Check out these ads (links to a YouTube video of the ad you can watch and show your students):