My kids have started talking about social e-commerce. Of course that is not the term they use, but buying via Instagram is growing fast. “Social e-commerce is the business of selling goods online—in quantity—through people’s social networks” – quoted from this great Fast Company article, “This $360 billion e-commerce trend is huge in Asia—and it’s coming to the U.S. next.” The article describes the growth of social commerce in Asia, where is now comprises 13% of all online sales in China. The article delves into the two most prominent business models – group buying and live e-commerce. This could be an emerging online retail practice to keep an eye on – and to share with your students.

This short article, “Corporate America must learn to innovate frugally to get through the coronavirus crisis,” (Fast Company, March 27, 2020) provides some great tips on frugal new product development. While the title of the article implies a coronavirus connection, the advice is universal. The author also gave a great TED Talk, “Creative Problem-Solving in the face of extreme limits” see below. The TED Talk includes some great #M4BW examples.

This article and video fits well with a discussion of new product development (Chapter 9).

The economic recovery in the United States has not been the same across the income spectrum. While the wealthiest 5% are doing quite well, those in the traditional “middle class” have not seen similar gains. This Wall Street Journal article “How a Two-Tier Economy Is Reshaping the U.S. Marketplace” (January 29 2015, non-subscribers click here) points out that those at the top 5% of the income scale spent an inflation adjusted 12% more from 2009 to 2012. During that same time period, the bottom 95% spent 1% less. It also reports the top 5% now account for 30% of all spending — up from 23% just twenty years earlier. The article details some of the implications for sellers of cars, houses, and beer. Hint, apparently that $64,000 BMW M4 (see inset photo) is a hot seller.

Similar income distribution exists in China — and this has influenced the smartphone market there. Another Wall Street Journal article “In Smartphone Market, It’s Luxury or Rock Bottom” (February 1, non-subscribers click here) which describes the Chinese market, where Apple’s iPhone stands alone as a “luxury” and brands like Xiaomi (at on third the price of an iPhone with similar technical specs) dominate the low end.

This story has implications for when you cover segmentation and targeting (many of these firms are now targeting premium or budget — not the middle any longer) or consumer behavior. 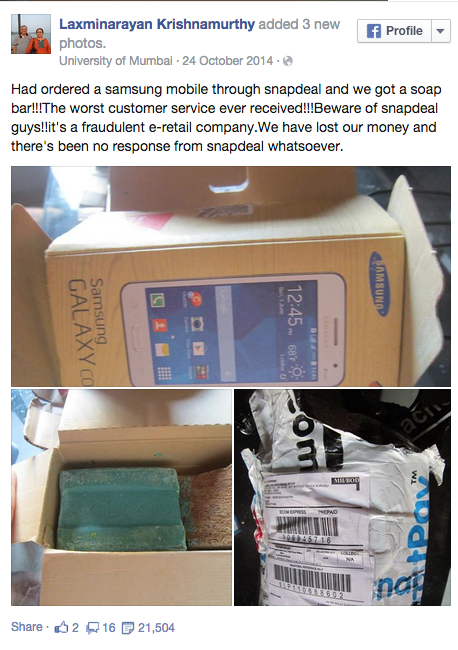 While online retailing holds great promise in developing countries like India, there remain challenges. Venture capital is flowing into this market, and some big players are fighting it out. This article, “Logistics Are Holding India’s E-Commerce Companies Back” (Bloomberg Businessweek, December 15, 2014 highlights some of the logistics challenges facing e-tail startups Amazon India, Snapdeal, and Flipkart — including the story of a man who bought a phone but received a brick (see image).

This article provides some examples to use when covering international issues and/or online retailing.

As Alibaba heads out on a road show to promote its upcoming IPO, it is time for us to get to know the giant wholesaler. As I checked them out, I learned a great deal. one thing I learned — we marketing professors should all get to know Alibaba.

Let me share a few of my favorite sources so you an be up to speed.  I was shocked at how big the online Chinese reseller is. Alibaba sold $248 billion through its collection of online resellers — that number is twice Amazon’s and three times EBay’s revenue. Alibaba has a different business model. Bloomberg Businessweek looks at the competitive threat to U.S. e-commerce in “Alibaba’s IPO May Herald the End of U.S. E-Commerce Dominance” (August 7, 2014). A Planet Money podcast “The Story of Alibaba” (September 3, 2014) offers a customer perspective that gives you an idea of the needs Alibaba fills. It is worth the relatively long 15 minute listen.